Yet another natural disaster struck Awaran district as torrential rains disrupted the communication system and washed away bridges, including the bridge connecting Awaran with Karachi in Jao area of Awaran.

At least four villages were reportedly inundated after heavy rainfall started on Wednesday and lasted till Thursday night. “It has been more than 24 hours that we are living under open sky with no electricity and relief,” said Ali Ahmed, resident of Jao.

Hundreds of acres of irrigated land was destroyed due to the downpour. The affected areas include Jao, Mashkey, Kolwa and Awaran town.  The communication system was also disrupted due to the heavy rains. 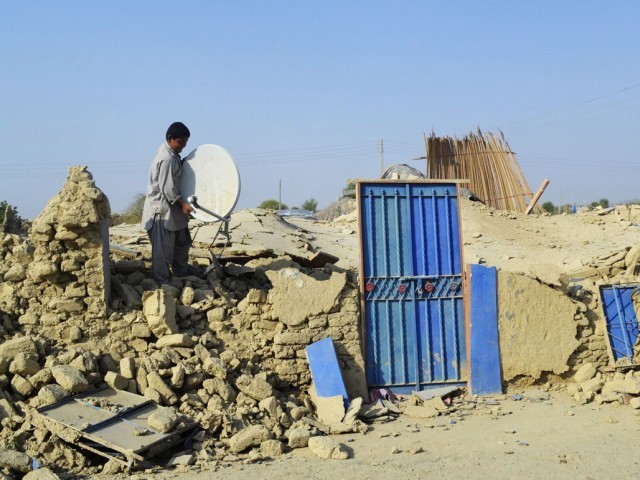 According to reports, hundreds of families are left stranded. “There is no electricity for more than 24 hours. No clean drinking water and enough food to eat,” said Shabir Rakhshani, a resident of Mashkay.

According to Balochistan Home Department, there were no huge damages to the property or the people. “We did not receive any report of casualty while damage assessment is underway,” Home Secretary Akbar Durrani said. “We are monitoring the situation.”

The Express Tribune tried to reach the Deputy Commissioner and Assistant Commissioner in Awaran but all the communication lines turned out to be dead.

People also complained that the recent rains had damaged the houses they had constructed after the earthquake wreaked havoc to their life and property in September last year. The devastating earthquake had flattened 95 per cent of Awaran but the rebuilding of the houses had yet to be started.